The complete solution for identifying and responding to choice and gaze.

Digital interactions are becoming more human-centric with the onslaught of virtual reality(VR), augmented reality(AR), and mixed reality(MR) - or just "XR" as an umbrella term for all of these. This shift brings all sorts of new challenges for enabling a user to interact with your content. One of the core challenges involved with these technologies is how to enable the concept of a cursor and choice for a user. Chooser allows for spatial choice and interaction that feels as familiar as a mouse, takes seconds to set up, and works with any collider in your scene. In addition, Chooser can easily be used for solving numerous gameplay issues that require aiming and selection and not just XR-related challenges.

After you drop Chooser onto an object you have numerous ways to configure it depending on your needs: 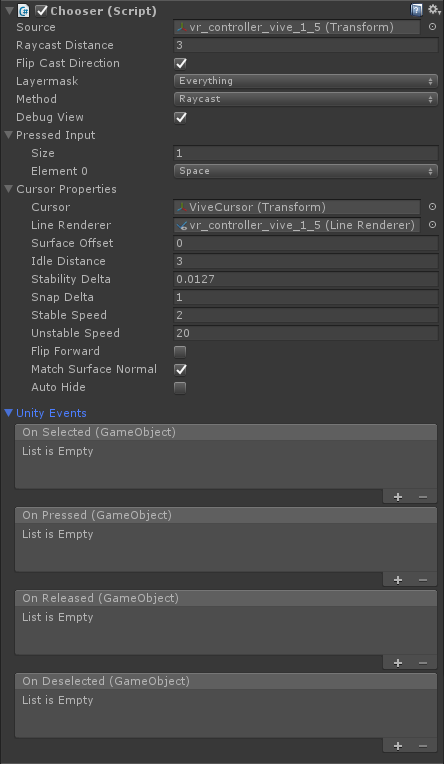 You have a few options for responding to when gazing begins and ends with Chooser as well as when input is pressed and released. The first way to use all of the events that Chooser provides is to create a simple script that implements the IChooser interface (or simply add these methods to your script without explicitly using the interface - your call). You could place the following code onto a cube with an active collider and begin to get all the events involved with gazing and interaction from Chooser.

To maximize platform support of Chooser, the actual inputs that drive the Pressed and Released events can be fully customized. Out of the box you can use the Pressed Input section of the Chooser inspector to set any number of keys or joystick input you may need. You can even leverage custom calls into Chooser if you are supporting multiple platforms for even greater control by simply calling Chooser's Pressed() and Released() methods. For instance, let's support the Vive with input from either trigger:

With the previous code and using a Vive controller as our Chooser source we could now point our controller at a box that has all of our response functions previously listed, squeeze the trigger, and make things happen with very little code.

In addition to handling events on the target objects themseleves we can also hook into Chooser's direct events through code or the inspector (under Unity Events).

Instead of creating your own classes for responding to interactions from Chooser you can simply drop Surge's Collider Button onto anything in your scene and hit the ground running with even more control and feedback with no coding.

Chooser.cs is the main component and interface for working with reliable visual object availability.

Can be manualy called to send input down events to selected targets.

Can be manualy called to send input up events to selected targets.

IChooser.cs is an interface for easily responding to the events Chooser sends out.

Called when a chooser "looks at" this target.

Called when a chooser stops "looking at" this target.

Called when a chooser accepts an input pressed action and is also "looking at" this target.

Called when a chooser accepts an input released action and is (or was) also "looking at" this target.